So a few things changed in the cryptocurrency landscape over the three years that I’d ignored it. One was that Bitcoin was no longer alone. When I first looked into BTC, there were very few other cryptocurrencies. Litecoin was new and Dogecoin was what it was intended to be – a joke. Over 2016, while BTC was mired in the $200-800 trading range, myriad other cryptocurrencies were launched and began to take up space in the market. Bitcoin was no longer dominant after this revolution, dropping from being most of the market to being around half of the market in terms of volume. Foremost among these new cryptos was Ether, which was different. It wasn’t just a store of value, it was a platform for creating utility tokens on the blockchain. These tokens, called ETH20s, spawned an entire new class of cryptocurrencies. More on this later.

Another phenomenon came from Bitcoin itself. Since by design the Bitcoin mining network was made up of individual miners, they on occasion had disagreements about how the network and its technology would move forward. This led to “forks” in the Bitcoin blockchain, with the non-“main” fork becoming its own cryptocurrency and “gifting” all holders of BTC at the fork point in the blockchain with equivalent currency. This meant that when I opened my Bitcoin private key, I was also given access to two new digital assets “for free” – Bitcoin Cash (BCH) and Bitcoin Gold (BCG). Each was valued in the thousands of dollars, increasing the returns from that original $2,000 investment.

All of this has led to a proliferation of “wallets” (apps and sites) that store your cryptocurrency for you and allow you to send and receive cryptocurrency. The other service that has become indispensable is the “exchange”, apps and sites that allow you to trade your cryptocurrencies among each other. These function like cryptocurrency stock markets, providing pricing at which users buy and sell along established pairs of cryptos. This is usually altcoins paired against Bitcoin and Ether, and a few other options depending on the exchange. You can also withdraw funds, trading your crypto for real world cash of “fiat”, but this carries many restrictions depending on where the exchange is based and where the user (or his bank account) resides.

Finally, there is the wild, wild world of Initial Coin Offerings or ICOs. Everyone and his sister is coming up with new altcoins, based on all sorts of premises and even technologies. These coins, or tokens, are offered at first to a supposedly select number of people that sign up for the ICO, at what is characterized as a great deal. Similar to a mundane Initial Public Offering for real-world shares in companies, the hope is that you buy at the lowest price at the initial offering, and that the asset appreciates (quickly). Many choose to sell the asset after the initial appreciation, locking in gains and reinvesting in the next initial offering. The difference is that real world stock markets are regulated and overseen by both government regulators and private watchdogs. There is no such equivalent for cryptocurrencies. ICO whitepapers (when they exist) can be a mishmash of marketing speak and obfuscation, hiding the lack of utility of many tokens offered at ICOs. This has also given rise to the (unethical) “Pump and Dump” approach, where some people (who may be affiliated with the offering or merely speculators) convincing small groups of people to bid up an altcoin (pump) then selling their own stack of crypto at the peak (dump). There are a lot of gullible people on the internet, as I’m sure all of you know.

So. The first thing I did with my recovered BTC is join an ICO.

I got into cryptocurrency in late 2013. I’d read a few articles on the subject of blockchain technology and Bitcoin (BTC) and found the subject fascinating. In particular, the acknowledged shadowy founder of the technology, “Satoshi Nakamoto“, was found to be not real person but a pseudonym for an individual or group. It was kind of insane that a manufactured digital “asset” could carry so much value existed.

I found out that the tech guy I worked with, Greg, was an early adopter of Bitcoin. He had a few hundred secured by printing the private keys on paper. Having bought in at sub-$100 levels, he was pretty much set. At that time BTC was already extremely volatile, and had bounced between prices from $600 to $1,200 in a span of weeks. After a couple of weeks of talking about it, one day he went on Coinbase, bought $2,000 worth of BTC (it was trading at about $800 at the time, so that was roughly 2.5BTX) and sent it to me. To this day he still hasn’t sent me his bank (fiat) information so I’ve been unable to pay him. So I still owe him $2,000, and will gladly pay interest, whether in crypto or fiat.

The Mt. Gox incident happened in early 2014, tanking the value of BTC into the low hundreds. I changed jobs at the time, and lost touch with Greg, so forgot about the BTC and took my eye off of the cryptocurrency space. While I wish I’d stayed aware of it so maybe I might have noticed the surge before it happened, I’m already fortunate to have had 2.5BTC in my possession by pure luck, so I can’t be overly upset.

Still, it’s pretty dumb of me that I only realized that cryptocurrency had exploded in 2017, in December. Or maybe I was fortunate that I realized it at all. My current job has disconnected me from the technology crowd and space, and I only retain that connection with effort through other channels. So my 2.5 BTC was worth what it cost, or more frequently even less, all the way until the end of 2016. It reentered my consciousness just as the value fell from its ~$20,000 peak in mid-December 2017, because one of my ex-coworkers in the tech space posted about an ICO on Facebook. 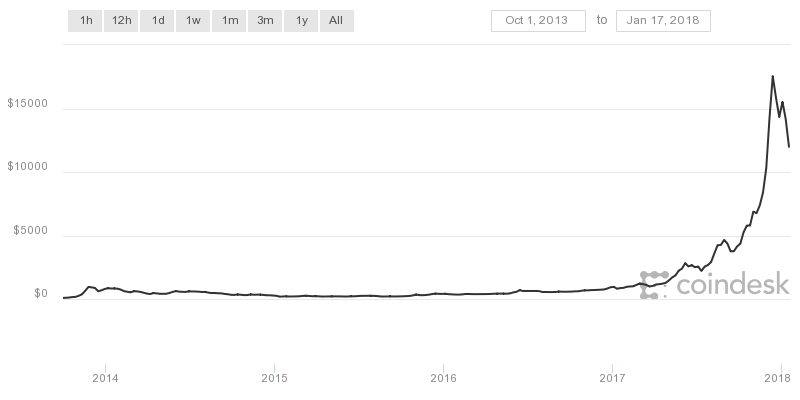 So I frantically had to relocate my BTC key information. Over the waning days of 2017 I try to find the information. The paper key is pretty much lost after moving three times across two countries over the last three years. So I struggle to sift through email and chat histories until I find some account information, but no password. So I have to wrack my brain for that.

It still surprises me when I think of it, but I remembered the password to the place that the BTC was stored in based on the “forgot password” prompt of the site. The chances that I’d forget a password (particularly the way I make passwords – they’re all unique and I never reuse) after three years of not using it at all are pretty high. So, again, kind of lucky.